The three-day JBL Fest October event took place at the heart of the Las Vegas strip, and featured exclusive performances by some of the biggest names in music and entertainment, including Khalid, RUN-DMC, Bebe Rexha, Priyanka Chopra Jonas, Shaq, Evaride, Mabel, and Armin van Buuren. Audio professionals were treated to an in-depth look at how the latest HARMAN solutions are driving innovation across a wide range of industries, from music production to retail to automotive. The entire event was powered by solutions from HARMAN Professional brands, including JBL VTX-A Series loudspeakers to Martin lighting to Soundcraft digital mixing consoles.

During JBLFest, @turneduppodcast put the new AKG Lyra Ultra-HD Multimode USB Microphone to the test saying, ‘Finally, a mic specifically made for content creators that is fully functional, high resolution, and looks sleek and professional.’

“We were thrilled to connect with thousands of industry professionals, partners and music fans at the biggest, most ambitious JBL Fest we’ve ever held,” said Frank Joseph, Senior Director of Marketing, HARMAN Professional Solutions. “From exciting performances by chart-topping artist Khalid and breakout band Evaride playing through JBL products, to demonstrations of music and podcast recording, guests at JBL Fest 2019 were able to see a powerful, 360-degree view of how JBL is transforming audio across the industry.”

Shaq hosts JBL Remix with a performance by RUN-DMC.

This year’s festivities kicked off at the ARIA Resort and Casino with JBL Remix. Hosted by Shaq, the event featured a throwback performance to the golden age of hip hop with RUN-DMC. Priyanka Chopra Jonas hosted a night of global beats at Club JBL, which featured Bebe Rexha with a special appearance by Armin Van Buuren. The event was capped off with JBL Live from Brooklyn Bowl, which featured unforgettable performances by Khalid and Mabel.

Other festivities included the JBL Bloq Party at the LINQ Promenade on the Las Vegas strip, which provided unique brand experiences that highlighted JBL’s legacy as the leader in portable, professional and in-vehicle sound. Anchored by the JBL Dare to Listen Crate, the Bloq Party featured musical performances and podcasts that were broadcasted from the JBL Pro activation, the latest in personalized audio at the Persona-FI car audio experience, and a unique look into the music of JBL Fest’s headline performer, Khalid. 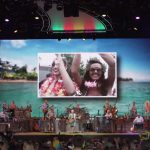 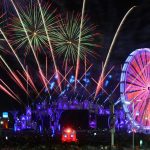