From Stage to Studio with Black Rebel Motorcycle Club: An Interview with Leah Shapiro and Peter Hayes 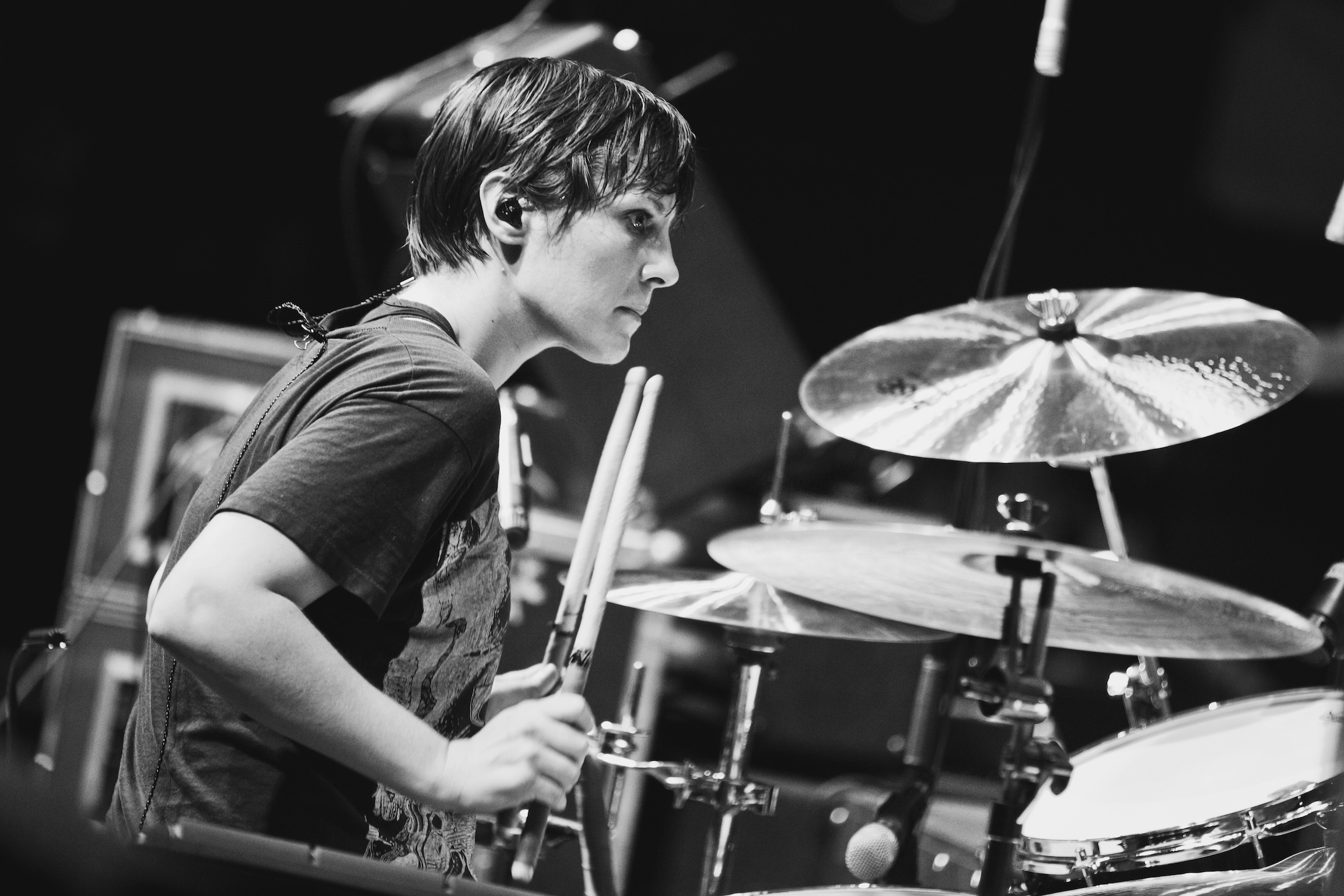 Since the band’s premier album release in 2001, California powerhouse trio Black Rebel Motorcycle Club (BRMC) has continued to grow a devoted worldwide audience for its edgy, seductive sound. As a HARMAN Brand Ambassador, we recently had an opportunity to shoot a video with BRMC at the band’s Los Angeles rehearsal space and experience, up close and personal, a sound explosion that could blow your black leather jacket right off your back.

While Peter Hayes (vocals/guitar), Robert Been (vocals/bass/guitar) and Leah Shapiro (drums) prepared for a fall tour and the release of their highly anticipated eighth studio album, I was able to catch up with Leah to find out about the group’s current plans and delve into BRMC’s creative process. Peter also joined us to discuss his and the band’s longstanding relationship to HARMAN gear.

Leah was born in Denmark but has family in the U.S. and became part of BRMC in June 2008, replacing the original drummer, Nick Jago. She had previously been the touring drummer for Danish indie rock faves The Raveonettes. Watching her pound her kit during our video shoot, it was impossible to tell that she is still recovering from brain surgery for Chiari Malformations, a condition she was diagnosed with in 2014 after insomnia, dizziness, headaches, tingling and numbness in her hands, a stiff neck and pain made it nearly impossible to play. A grassroots, fan-funded campaign raised tens of thousands of dollars to help defray Leah’s medical costs, while she worked on getting her chops back.

[MM] It was really impressive to see how strong you were playing during the video shoot; is the medical condition still impacting your work?

[Leah] Thank you for saying that! I feel pretty good overall. Of course, I can still have bad days, but more and more, that tends to only happen if I have done something that I’m not supposed to do (like not stretching and doing my warm-up and cool down after a show or a long rehearsal). I definitely have to take care of myself and put more effort into staying physically fit and healthy now, but that’s not a bad thing. It makes me feel better and will also help ensure that I don’t acquire any new injuries.

I wouldn’t say that I am back to the way things were before the diagnosis—I spent pretty much a full album cycle, prior to my diagnosis, going completely crazy, because something just didn’t feel right when I was onstage playing. I could tell something was way off with my balance and coordination. I kept getting further and further away from feeling like my instrument was just an extension of my body. It got to the point where I really did think I was just losing my ability to play. It’s been about a year and a half since my surgery, and physically, I feel comfortable behind the drums again. My confidence is starting to come back as well, so I’m happy and I can breathe a huge sigh of relief!

Looking back, I actually can’t believe that I went on tour about six months after such a huge surgery. I’m not saying that I wasn’t ready for it, but I just still had a lot of work to do, both physically and mentally. I will never forget how amazing it felt to get to play music again, though. Everyone was just so supportive; it’s hard to properly articulate how much that really meant to me and how much it helped.

[MM] BRMC has such a remarkably high-energy live sound; how does the band manage to capture it when you record?

[LEAH] A lot of our writing comes from playing live, either at soundchecks when we’re on tour or when we work in our rehearsal space at home in L.A. Because we write together in that way, I think the same energy that’s present in our live performances exists in the writing and in the recorded versions of our songs.

When we go into a rehearsal studio to write with our instruments up and loud (or jamming, if you want to call it that), there is a lot of improvising and reading each other as we play, so the music can lead the way. The ideas come out pretty naturally, because they are born out of that specific moment in time, the energy in the room and our interaction/telepathy. The initial ideas come fairly easy, but taking a 45-minute jam and turning that into an actual song is slightly more difficult.

[MM] As a three piece, what elements of playing together do you feel are most responsible for that massive sound?

[Leah] If we want to have a big sound, there is really no room for any of us to take a backseat or slack. To keep that vibe when we perform, we have to be a little creative with our setup and the things each of us are responsible for. If a song requires vocal harmonies or additional instruments, we have no other choice but to figure out who is able to take on that something extra to make the song come across in the best possible way.

[MM] With your U.S. tour launching on October 11, do you have a front of house (FOH) engineer you work with regularly that will be joining you?

[Leah] We actually have a couple front of house engineers that we work with, depending on who is available. Obviously, the FOH position is extremely important, so it’s a lot better to have someone who knows our music, our setup and us. Most of our songs need to be mixed in a pretty specific way and, because we all have a lot going on, it’s important that the FOH engineer understands how the different amps, instruments, effects, etc. need to be used in specific parts of the songs, so the sound and dynamics come across in the way we need them to. That aside, we are also fairly loud onstage (although we have gotten better), so that doesn’t really make the FOH job any easier.

We’re doing the tour with Death From Above 1979. They are such a great band and very cool people, so we are all pretty excited for this tour.

[Leah] That’s pretty cool that you noticed that. It is one of our strengths. It’s probably not actually due to telepathy, even though we like to say that. We know each other really well, both musically and as friends, and I am not sure if that’s what gives us the ability to read each other so well without normal communication, but whatever it is, I think we are lucky to have this connection. It’s not something I have experienced to this extent working with other people, so it’s pretty incredible that we can tap into this collective energy.

[MM] It seems that from an early age you knew you wanted to play music. What attracted you to the drums?

[Leah] I started playing drums when I was in high school in Denmark, which I suppose is pretty late. Most people who do this for a living seem to have started playing when they were really young, but I was 17 or 18. I always loved music, and my dad has an amazing vinyl collection that I used to like going through when I was little but, to be honest, there was really no particular reason why I started playing drums. It just seemed like a good idea and something I wanted to do, so I did it and, sure enough, I became very obsessed right away. My brother lived in New York City at the time, so I went there for two months over the summer to study with a really great teacher I found and just never stopped being obsessed. This might sound weird, but I find it very peaceful and meditative to play drums, and I like finding rhythms in my surroundings.

[MM] As a HARMAN Brand Ambassador, are there specific products that the band relies on?

[Peter] In our home studio, we use a pair of JBL 3 Series reference speakers for mixing and recording. At our rehearsal studio, we have a few sets of JBL monitor wedges. For the bass and guitar live sound, we use the [DigiTech] Whammy and Bass Whammy.

On the first record [B.R.M.C.], we used a DBX compressor on almost everything; it’s what we had at home, didn’t really know how to use it properly, but we put it on every vocal and drum track we did at home, and most of that record was done at home.

We’ve used a few different Lexicon and DBX products in studios throughout the years; the sub-harmonic synth is always fun, and you can get lost in the Lexicon reverb for a few hours at a time, which is nice.

For a long time, I used the orange back JBL speakers in my Fender Twins, and I had four going at a time. It was a bit much, but fun for me anyway. I think our FOH mixer just left me out of the PA. The very first piece of gear I saved up for at 16 was a DigiTech RP1. I loved it and, if I remember correctly, it had a headphone jack, so you didn’t need an amp, and I’d be up all night swimming in that!

Many thanks to Leah and Peter for sharing their insights with us. As a musician, engineer or producer, how do you translate live sound to recording—or vice versa? Let us know in the comments. 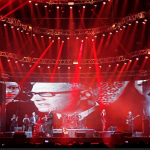 Meet Your Lighting Team Previous
The Magic of Concert Lighting with Bud Horowitz, Lighting... Next 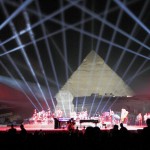