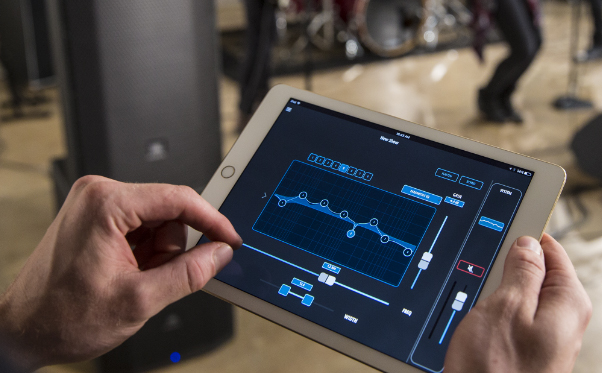 Today’s light, portable P.A. systems give you the flexibility to play just about anywhere. But with this flexibility comes the challenge of consistently sounding your best, even in unusual or unpredictable environments. Luckily, many modern P.A. systems offer digital signal processing that brings sound-sculpting tools right to your fingertips.  EQ is the most effective tool for tailoring your sound system and once you know the basics, EQing a portable P.A. is simple – all you’ll need is your P.A. system, access to its EQ controls, some reference material, and your ears.

In this blog we’re focusing on advice for solo or smaller musical ensembles such as singer-songwriters, duos, DJs, MCs or even someone making a presentation. In these use cases, people often choose the simpler set-up provided by plugging into a self-contained, powered PA system that has built-in mixing capabilities, such as the JBL  EON 600 Series or PRX800 Series. That said, the EQ concepts presented here are universal and will apply to larger groups who are mixing their sound through an independent mixer such as a Soundcraft Signature or Ui-series mixer.

Your portable sound system should meet three simple goals: be loud, sound great, and avoid feedback. Professional P.A. systems should offer a flat, natural response out of the box, giving you a neutral starting place for tailoring the sound of your system. But regardless of the system you choose, the environment that it’s used in will influence its sound.  Some of the challenges you might face include competing with noisy audiences; interacting with imperfect acoustic spaces with too many bright, reflective surfaces (or too many soft surfaces that deaden sound); problematic mic choices; or even inconsistent performance techniques onstage. In these situations, even the best P.A.s benefit from EQ settings to balance the frequency response, compensate for acoustic issues, and enhance your sound with special effects.

EQ, at its simplest, increases or reduces volume levels of target frequencies in an audio signal. The most common equalizers for live sound applications are graphic and parametric EQs: A graphic EQ offers the ability to boost and cut individual, fixed filters spaced evenly over the entire frequency range, usually in third-octave bands. A parametric equalizer is a little more complex, giving you control over three selectable attributes: boost or cut level, center frequency, and bandwidth (known as “Q”). Widening or narrowing a parametric band’s Q lets you dial in wide swaths of frequencies or ultra-precise frequency targets.

Making informed EQ decisions gets easier as you learn the frequency ranges of voices and instruments and become familiar with the characteristics of key frequency bands. The human hearing range falls between 20 and 20 kHz and sound systems tend to deliver frequency responses somewhere close to that spectrum. Let’s look at some important frequency ranges:

Bass: 60 Hz to 200 Hz This low end of the spectrum includes kick drum, toms, bass guitar, and deep synth sounds. Fundamental vocal frequencies fall around 100 Hz. For a cleaner sound from your vocal mic, filter out sounds below that frequency to remove rumble and room noise.

Upper Bass to Midrange: 200 Hz to 800 Hz Body sounds of acoustic instruments such as acoustic guitars land in this range. If you hear “tubbiness,” try reducing frequencies around 200 to 300 Hz. To fix “honky” nasal sounds, trim frequencies in the 400 to 600 Hz range.

Midrange: 800 Hz to 2 kHz Vocal intelligibility is strongest in this band. To help vocals cut through the mix without turning up the overall volume, boost frequencies here.

Upper Mids: 2 kHz to 4 kHz Speech consonances fall in this range; adjust these frequencies to hone in on clarity.

Presence: 3 kHz to 5 kHz Enhancing this range can increase “perceived loudness,” causing sounds to jump out in the mix. To bring out an instrument or voice, try boosting these frequencies before making blanket volume adjustments.

Highs/Sibilance: 5 kHz to 8 kHz The top ranges of most instruments land here; boost these frequencies to “brighten” sounds. Harsh vocal “sss” sounds also fall in this range; trim to cut the bite of sibilance.

Highs/Air: 12 kHz to 16 kHz This highest frequency range includes cymbal sounds and guitar string squeak. Boosting can add “sparkle” to your sound, but too much will sound artificial or “hypey.”

Ready to fine-tune your P.A.? First, put on some familiar music reference material, set your volume, and walk around the venue. Listen for frequencies that jump out or seem to be missing. Pay particular attention to the center area when you are out in front of the P.A., where the response will be most accurate. (P.A.s with remote sound-management apps, such as the JBL PRX800 Series’ PRX Connect Wi-Fi-connected app or the EON 600 Series’ EON Connect Bluetooth-connected app, can make quick work of this process.)

When correcting problems, before boosting the sounds you can’t hear, try removing frequencies you hear too much. In the process of performing subtractive EQ adjustments, you might unmask those “missing” sounds. (And you’ll preserve headroom.) Remember that you can manipulate existing frequencies, but you can’t add frequencies that were never there in the first place. If you try, you’ll just introduce noise and increase the potential for feedback.

For advice on EQing portable P.A.s for the most common scenarios, we turned to Damien Curry, HARMAN’s senior speaker and amplifier product specialist.

Let’s say you’re a singer/songwriter who plays guitar, and your typical gigs are coffee shops or small outdoor spaces. In this scenario, it’s important for your voice and instrument to be heard clearly over conversations, without overwhelming your audience.

“From an EQ perspective, you’re going to want to have a decent amount of high-mid frequencies and maybe a little bit of high end, because that’s the kind of sound that carries over conversations,” says Curry. “You don’t want to have a huge bottom end because if you’re outdoors or inside a space like a coffee shop, your bass is going to register way more than the average person is going to want to hear in any given environment.”

In tight spaces, microphones tend to be in close proximity to speakers, which can introduce feedback problems. “That’s why you want to make sure the high end is not too bright or too shrill, because that high end is where the feedback typically takes place.”

Curry suggests moderate boosts in mid-range. “That’s where the bottom end of an acoustic guitar would be. This approach allows someone who’s sitting in front of you to hear the full body of the guitar without getting bombarded with the super-low bass notes, but it still carries over a crowd, over a typical conversation.”

A similar profile applies to singers performing with backing tracks. “If someone is using our EON One Pro and streaming tracks via Bluetooth, they don’t want a ton of bottom end coming from their microphone because it’s going to be competing with the Bluetooth source, which is typically a commercial audio source, which probably already has a lot of bass built into it.”

Perhaps you’re speaking in front of a small crowd; you might even want to pass a mic around to different people. Your number one goal here is optimizing speech intelligibility.

Your EQ approach will be similar to the singer/songwriter profile, with less low-end enhancement. “You want to roll off the low end and reduce upper bass to mids to make mic handling noise, rumbling, and wind noise less present. You’d like the high mids to be there, you’d like a little bit more high-end presence, so it cuts through a little bit better,” says Curry. “People speak at different volumes and if someone speaks really low, that person can benefit from having a little bit of boost in the highs. That said, if you are experiencing high sibilants (that harsh sssss sound) or feedback, the high mids and highs should be attenuated.”

“The approach depends on the style of music, but start by imagining what you would want to hear in your car or at home,” says Curry. “You want a nice, solid, fat bottom end.” We’re talking low, around 30 to 40 Hz. “That’s the beat, if you will, the pulse of a sound system.”

In this case, boosting mids and mid highs can make vocals and lead instruments stand out too much, which can sound jarring to people accustomed to hearing club mixes. “When you go to a club, you’re used to hearing bottom end and nice top end, and there’s not a heck of a lot of stuff being boosted in the upper mid range,” says Curry. This EQ treatment ends up looking like the familiar “smiley face” EQ curve: Boosted bottom end, “flat” (source-level) midrange, and enhanced top end.

Remember that EQ is a powerful tool, so take a conservative approach to adjustments.

Apply the smallest changes that you can get away with (try using a 5dB limit as a guideline), and after you make adjustments, take the time to listen again, with an honest, critical ear. Above all, be true to your own unique, authentic sound. That’s what the audience came for!

What are your EQ or portable PA Tips? We’d love to hear them and invite you to share them in the comments below. 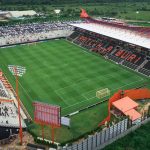 “Weatherproof” Speakers and IP Ratings Previous
Wired or Wireless for Visiting Devices? Next 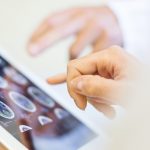