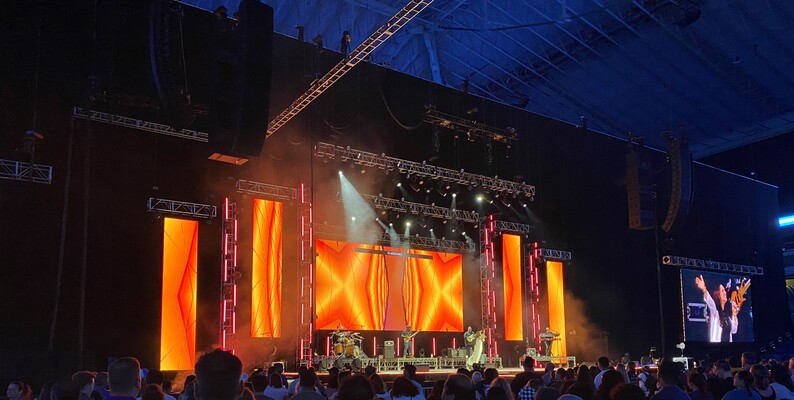 UNITE San Antonio is a two-day community worship and live music event that took place on July 29 and 30 at the Alamodome. Produced by the Scott Dawson Evangelistic Association, the two evenings featured influencers, speakers, live music from Chris Tomlin, King & Country, David Crowder and more, in addition to presentations from Dawson himself. To ensure balanced sound quality and a dynamic live concert experience, the show’s producers turned to Internally Sound to provide a capable sound system.

To accomplish this task, Internally Sound partnered with HARMAN Professional Solutions and First Born Productions to design and deploy a JBL VTX line array system for its versatility, intelligibility and impactful sound quality.

Co-owners Phil Jenkins and Mark Jenkins of Internally Sound worked with JBL technicians to design the system, which featured VTX A12 and V20 tops as well as B28 and S28 subs. The main left-right hang consisted of 32 VTX A12 line array speakers (16 boxes per side), with 18 VTX B28 arrayable subwoofers (9 subs per side) suspended directly behind the A12 hangs. The JBL VTX A12 is a dual 12-inch line array loudspeaker with 90-degree dispersion, which helped the team deliver unmatched performance, sensitivity and coverage at the event. To enhance sound quality for the arena’s wrap around audience, Internally Sound also deployed 32 VTX V20 line array speakers (16 per side) as out fills. The team supplemented the low end with 27 VTX S28 stackable subwoofers distributed across the floor in front of the stage in nine cardioid-stacks of three S28 subs each.

“UNITE San Antonio—like many of the events we do—featured a combination of live music and speech segments,” said Mark Jenkins, Co-Owner/Operator, Internally Sound. “The JBL VTX system gave us the articulation and detail we needed for the speech parts, but it also delivered the power and impact needed for the concert artists. It sounded fantastic. The bands were very happy with it—one of the bands’ engineers said it was his all-time favorite concert PA. So it was smiles all around with the VTX system.”

“We’ve been using the JBL VTX V20 speakers for almost a decade, and it’s been a big success for us” said Jenkins. “The V20 is a compact box that’s not terribly big or heavy. It pins well and flies well. We also brought in First Born Productions to provide the A12 speakers, which blended seamlessly with our V20 boxes and helped us deliver perfect coverage in the entire arena. In terms of the PA, we’d be very happy to roll in with the exact same system again. We’re very grateful to be a part of Unite San Antonio, and all of the work we do with Scott Dawson’s ministry. It was a big event, but the JBL system made it easy.”

Are you planning a project? We Can Help!