Since AKG was founded 75 years ago, we’ve developed thousands of audio products for both professionals and consumers—from loudspeakers to headphones to phonograph cartridges to car horns, intercoms, telephone handset capsules, and “cushion speakers.” (Yes, speakers that went inside pillows were a thing, back in the day.) But we’re most famous for our microphones. In this latest installment of our AKG 75th Anniversary retrospective series, we’re looking back at the history of our legendary microphones over the years. 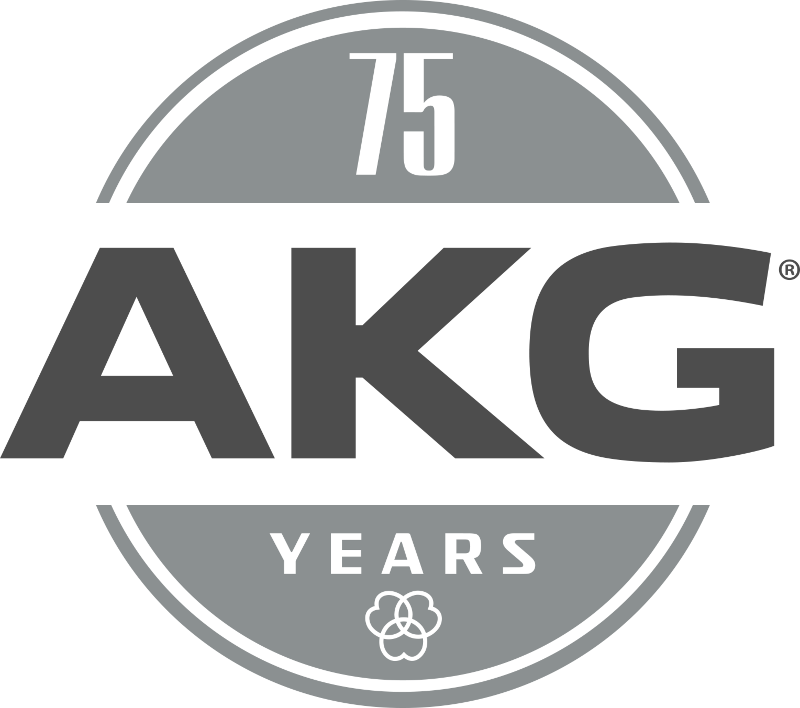 AKG mics have captured some of music’s most iconic voices, from Frank Sinatra to David Bowie to Kanye West. Legendary producers George Martin and Quincy Jones have raved about their AKG mics. AKG mics were used onstage at The Beatles’ watershed 1965 Shea Stadium concert, and AKG technologies went into orbit onboard the MIR space station. In 2010, AKG received a Grammy Award for “contributions to the art and science of music recording and performance through innovation and excellence in product design.” 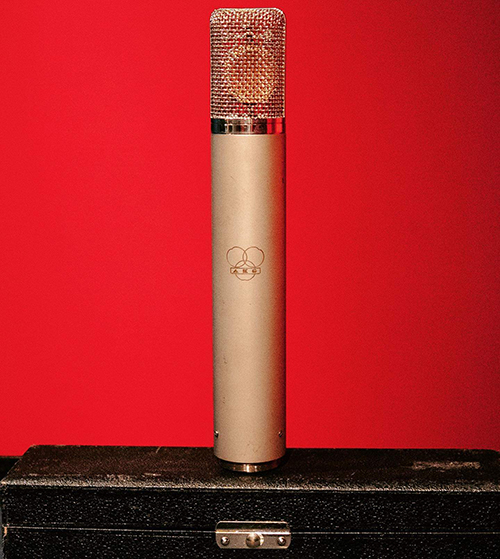 The legendary AKG C12, the world’s first large-diaphragm, remote-controlled multi-pattern condenser microphone. (Special thanks to @Tom_Beek, Power Sound Studio and any related original copyright holders for the strictly borrowed use of this image and redirection back to its copyrighted source: https://www.instagram.com/tom_beek/?fbclid=IwAR3epzudm0Bz1gpvbOINNkkuaD_n4p7y1KsJ29SD06mgs5_jcsOegcD1I1o

AKG has produced hundreds of microphones over the decades, including dynamic mics, condenser microphones, USB mics and wireless microphones. We’ve even made underwater mics, and a mic with a built-in spring reverb. But our C Series mics truly changed the studio game. And it all began with the AKG C12.

C12: Breaking New Ground
The C12 story really starts with the C1, AKG’s first condenser tube microphone. Only six C1 microphones were built, but its design led to the development of the legendary CK12 capsule, a milestone in transducer technology and the first to offer constant frequency response and sensitivity for all polar patterns.

In 1953, we introduced the legendary C12, the world’s first large-diaphragm, remote-controlled multi-pattern condenser microphone. The heart of the sound of the C12 is its CK12 capsule, which uses a dual-backplate design that exhibits consistent on-axis sensitivity when the polar pattern is switched. The capsule paired the dual-backplate approach with two 10-micron diaphragms. (Later, the CK-12 capsule was upgraded to 6-micron Mylar capsules.)

“The C12 … was a marvelous mic,” said Beatles producer George Martin. “It was very sensitive and could pick up things with great clarity from quite a distance away… it was a very ‘hot’ mic, as the Americans would say.”

The C12 was designed for commission by RAVAG, the Austrian national radio network. “They were looking for a microphone ‘as thin as a pen,’” designer Konrad Wolf said at the time. “Nobody was able to make that … but in any case we came up with a slender, cylindrical shape for the C12.” 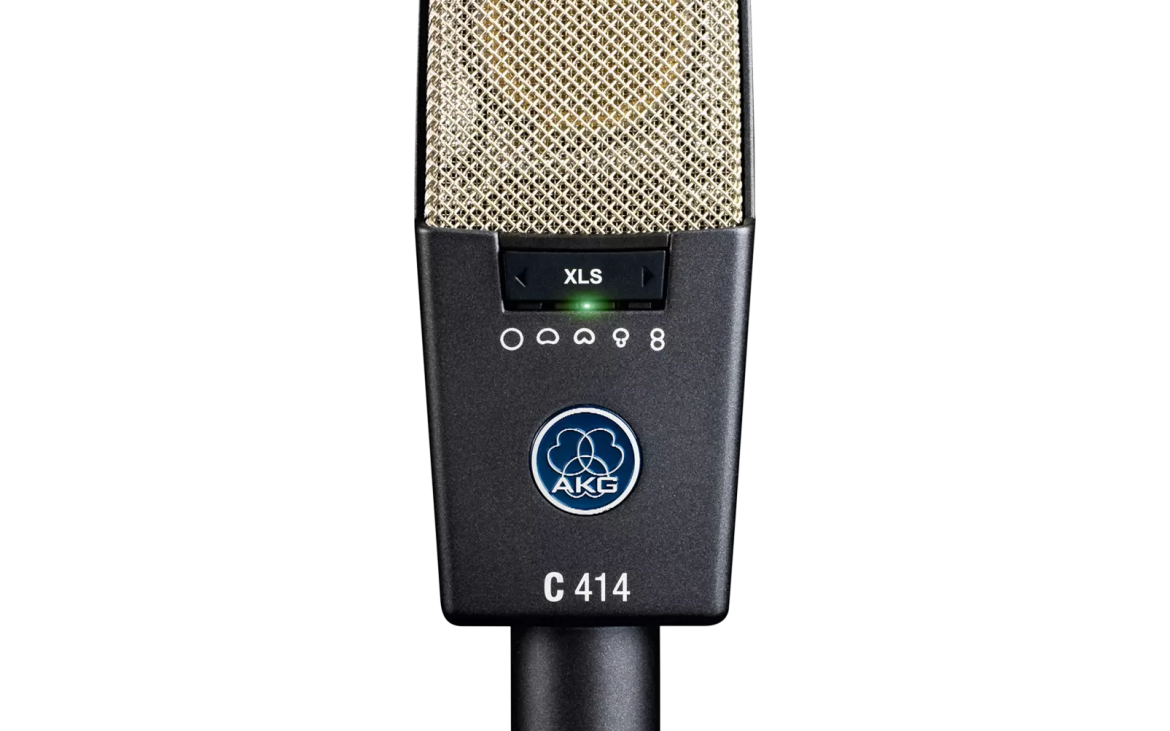 Famously, versions of the C12 were created for Siemens and Telefunken, including the Telefunken Ela M 250 and M 251. A stereo version of the C12, the C24, was created in 1959 by stacking two identical capsules that could be rotated to vary the stereo perspective.

The C12 quickly became a fixture in top studios around the world. 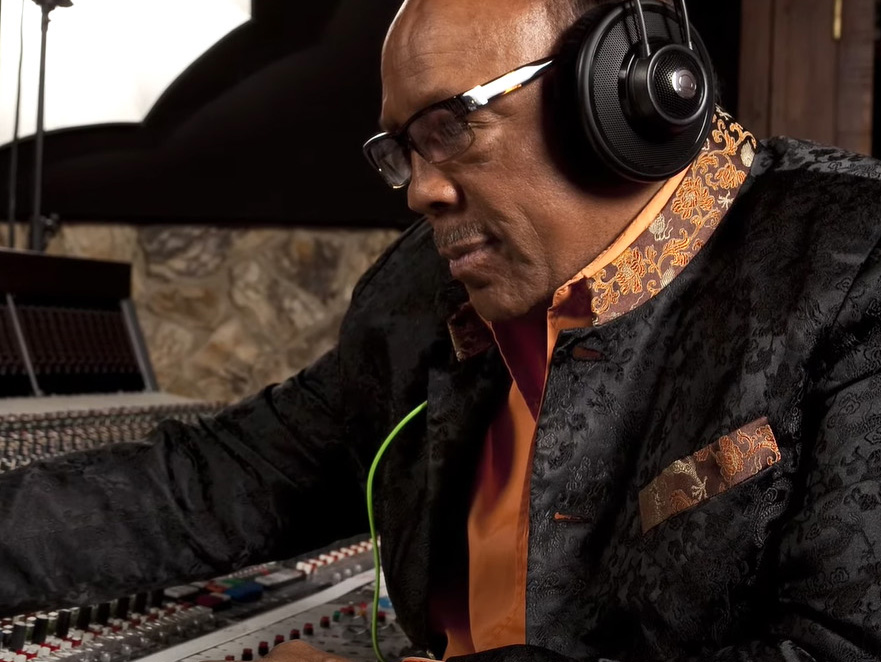 The most famous use of the C12 might be the 1985 recording of “We Are the World”. Producer Quincy Jones arranged 21 C12s to capture the four dozen-plus celebrity singers. (Image from AKG YouTube).

The C12 captured Vince Gill’s pure, soaring tenor on his Grammy-winning ode to bluegrass, “High Lonesome Sound.” “He has a high register,” engineer Chuck Ainlay told Mix magazine, “but he has a warm voice, which is what makes him special, I think. The C12 was the ideal mic, because it would pull the air from his voice.”

But the most famous use of the C12 might be the 1985 recording of “We Are the World” at A&M Studios: Producer Quincy Jones arranged 21 C12s in a U-shaped configuration to capture the four dozen-plus celebrity singers at the session, including Bob Dylan, Stevie Wonder, Michael Jackson, Tina Turner, and Bruce Springsteen. Jones had planned to record the artists’ solos one at a time, but when time ran short, he switched to his backup plan. “Taking this kind of chance is like running through hell with gasoline drawers on,” he told Rolling Stone. “Any talking or outside noises, laughing, giggling, even a creak in the floor, could ruin the whole thing.” Placing the 21 microphones in formation, Jones had the artists perform side by side, each stepping forward to sing solos. 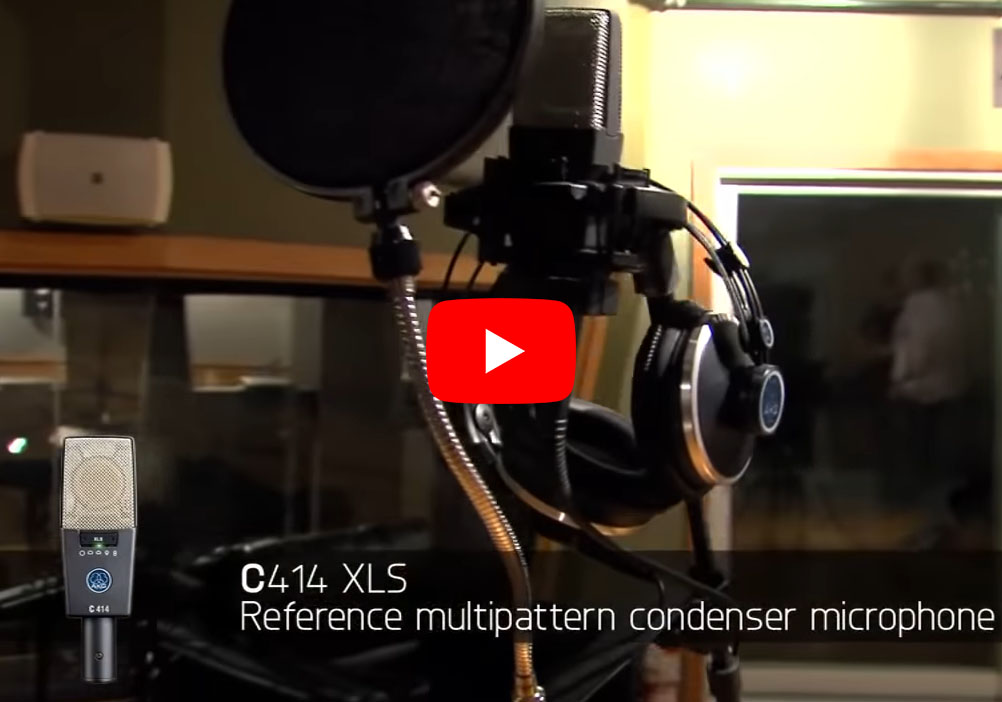 Watch this discussion with multiple Grammy-nominated and winning Stadiumred Studios as they share how AKG C414 microphones have been a staple for capturing and recording a who’s who of top recording artists.

The original C12 is considered by golden-eared producers and engineers to be the Holy Grail of tube condensers. Vintage C12s are prized today, although original models are exceedingly rare and can cost upward of $15,000—if you can get your hands on one.

C414: Going Solid-State
The original AKG C414 debuted in 1971. It featured the CK12 capsule and the electrical design of the C412, an early solid-state version of the AKG C12A tube microphone; and added a hypercardioid pickup pattern. Over its 50-year lifespan, the 414 has come to be widely appreciated as a workhorse microphone that is ideal for a wide range of applications, from vocals to drums to horns to acoustic guitar.

Legendary engineer Al Schmitt was a fan of the C414, using it on toms in his “go-to” drum mic setup. (Other AKG favorites included C452s, D12s, and D112s placed throughout the kit, with a matched pair of C12s as overheads)

Billy Idol says he has always sung into an AKG 414: “We’ve experimented with others but always come back to the 414. You can move around a lot while using it, and I find that with my vocal range I can get a lot of sounds out of it. Sometimes my voice sounds muddy in the studio, and the only thing that can clear it up is the 414.” 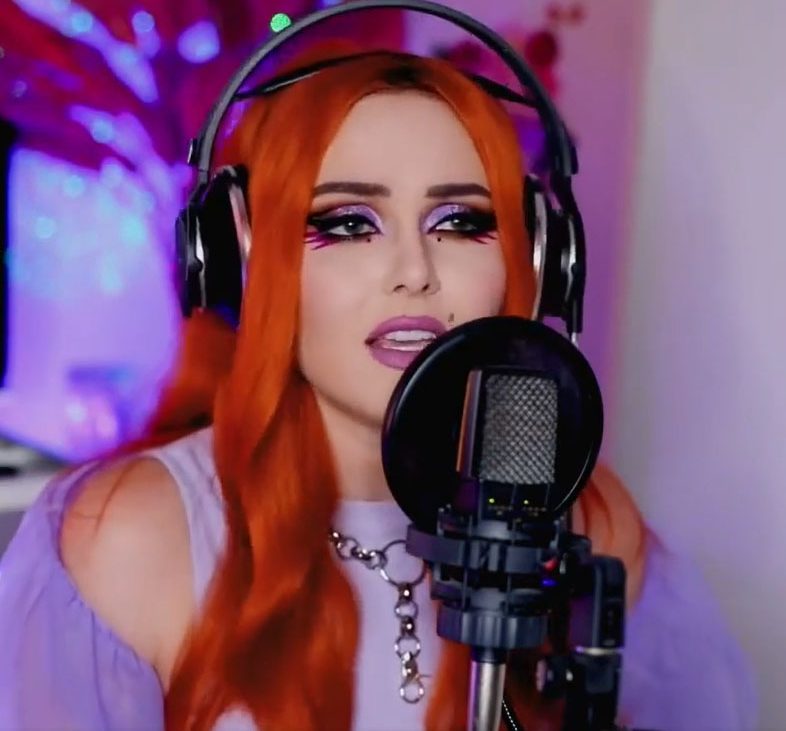 The C414 has seen more than a dozen incarnations, mainly distinguished by their capsules. Early versions featured the original CK12; the C414 EB variant was perhaps the most ubiquitous, becoming a staple in top studios around the world.

In 1986, Queen producer Reinhold Mack used 414 EBs to capture Freddie Mercury’s voice for the layered vocal harmonies of “One Vision”.

With more than 120 parts, the CK12 capsule was notoriously complicated and labor-intensive to build, and later C414 iterations moved to nylon capsules. One of the most popular versions was 1986’s C414 B-ULS (“Ultra Linear Series”) which boasted improved circuit linearity and a lowered noise floor; the C414 B-ULS went on to become our bestselling condenser for many years.

C414 XLS and C414XLII: Modern Classics
Today, we are proud to offer the AKG C414 XLS and C414 XLII, which carry the C Series legacy forward in our most versatile models yet.

These multipattern condenser mics are true studio multitaskers, offering a range of polar patterns, highpass filters and pads that let you capture any sound source from the softest strings to monster amp cabs in brilliant clarity. The difference is in their capsules:

The C414 XLII Reference Multipattern Condenser Microphone offers a slight present boost and impressive spatial reproduction, similar to our original AKG C12 microphone, delivering stunning captures of vocals and solo instruments. The C414 XLII features nine polar patterns, and offers three bass-cut filters and three attenuation levels for capturing anything from close-up instruments to sources up to 158 dB SPLs. A peak hold LED displays even the shortest overload peaks. For live sound applications and permanent installations, all controls can easily be disabled for trouble-free use.

The C414 XLS Reference Multipattern Condenser Microphone maintains the sonic character of the legendary C414 B-ULS, and features the same capsule as the iconic C414 B-ULS, for a transparent response. Engineered for highest linearity and neutral sound, the C414 XLS captures beautifully detailed recordings of vocals and acoustic instruments. The C414 XLS offers a choice of nine polar patterns, with three switchable bass-cut filters and three attenuation settings, plus peak hold LED and disableable controls for live use.

C214: Iconic Sound, Streamlined
For those looking for an affordable entry into the C Series, the C214 large-diaphragm condenser microphone is a cost-conscious alternative to the C414. The C214 captures sound by combining one capsule of the legendary C414 dual-capsule system and patented AKG Back-Plate Technology, and offers a bass-cut filter and a switchable 20 dB pad that allows recording of sources of up to 156 dB SPL.

C12VR: The Modern Holy Grail
Our flagship C12 VR contemporary version of the C12 uses the original 6072A vacuum tube and dual-diaphragm design but incorporates an updated, edge-terminated CK12 capsule and state-of-the-art components for lower noise and distortion and reliable operation. And, of course, that iconic C12 sound that is guaranteed to make some studio magic.

Ready to elevate your next recording with the iconic sound of AKG microphones? Explore our extensive product portfolio at www.akg.com. 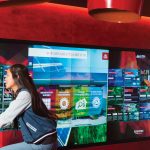 Standardizing the Space with the Power of Presentation... Previous
When Milliseconds Matter: The Reality Behind Latency... Next 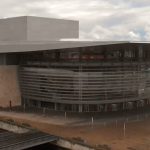