The PGA Merchandise Show is an annual trade show and convention hosted by the Professional Golfers Association (PGA) to showcase everything from golf clubs and balls to apparel and golf carts. In addition to vendor booths promoting their wares, the show features a main stage for award ceremonies, panel discussions, guest appearances, interviews and more.

Lighting the different elements of the show, including vendor booths and the main stage, presented unique challenges as well as creative opportunities. Don Garrity of Technical Management Solutions LLC, producer and technical director for the show, highlights the different roles of lighting and the approaches that he and his colleagues took when designing for the show.

“The lighting for the exhibit booths—Titleist, FootJoy and the others—really just needs to enhance the products, make them jump out to the people coming into the booth that are interested in purchasing them and seeing what’s new,” says Garrity. “On the main stage, the lighting is there to draw people in because of some excitement, something interesting other than just an exhibit booth. And we change the lighting depending on the panel that’s up there or the individual that’s presenting. We’ve got different looks, so we give them a background that relates to their graphics or just a different look in general.”

To light both the main stage and vendor booths effectively, Garrity and his team deployed Martin Professional MAC Aura, MAC Viper Performance and MAC Viper AirFX fixtures. Mike Walker, Master Electrician for the PGA Merchandise Show, explains how the feature sets of the MAC Aura and MAC Viper Performance helped create bright and even, yet tightly framed lighting to highlight booths in a neutral way.

“What’s nice about the AirFX—I’m also using it as the primary key and back lighting at the forum stage—is that I can color balance to 3,200 degrees and create a warmer feel for a stage look.,” said Mike Mahoney, Lighting Designer and owner of Mahoney Design.

The MAC Viper AirFX provided supplemental lighting for the booths, but really had a chance to shine on the main stage. Mike Mahoney, Lighting Designer and owner of Mahoney Design, breaks down his use of the MAC Viper AirFX.

“At this particular PGA show, I’m using an AirFX for a couple of different things,” says Mahoney. “I’m using them in FootJoy and Bridgestone to light product. I put them on bright white, 5,600 to 6,000 degrees Kelvin, and they’re lighting flat. But what’s nice about the AirFX—I’m also using it as the primary key and back lighting at the forum stage—is that I can color balance to 3,200 degrees and create a warmer feel for a stage look. But during transitions, I can bring them out into the house, pop in a gobo, rotate the gobo, zoom it out, put color in, and create a completely different feel with the same fixture. So, one fixture is multipurpose. They’re not only lighting a product or a person, but they can then become an effect light, which is fantastic.” 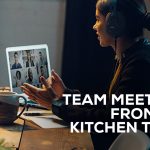 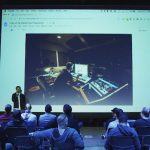