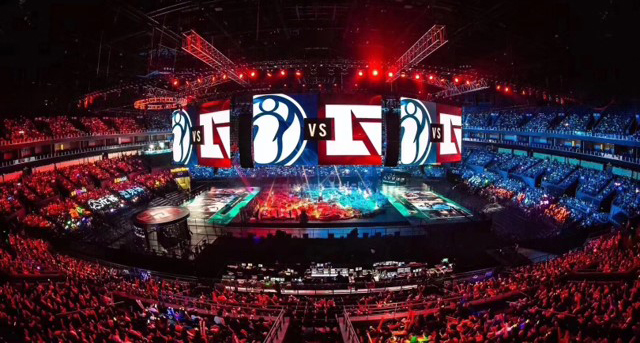 Esports, a form of entertainment, featuring organized multiplayer video game competitions, is a quickly growing industry that’s only getting more popular each year. In 2020 alone, more than 443 million viewers tuned in to watch their favorite gamers go for the glory. Although Asia currently boasts the largest esports market—the 2018 League of Legends Professional League (LPL) Finals in Shanghai attracted more viewers than that year’s Super Bowl and popularity is growing in Europe and North America.

While international finals are often mega-productions held in arenas of more than 60,000 attendees, esports events can range in size from high school-level matches and university competitions to the theatrical spectacles described above. Esports events come with their own set of unique requirements and challenges to consider when designing an appropriate AV system in order to support the action and deliver a dynamic fan experience. In this blog, we will examine the basic technical structure of esports applications and how to use that framework to build AV systems for small-scale local events, regional finals, university-level galas, and international championships.

Why Do We Watch Esports?
To understand why people watch esports, we must first ask why people watch football, basketball, baseball, hockey, soccer and other “traditional” sports. We watch these games because it’s inspiring to witness the best athletes in the world perform at the highest level. A lot of people play these same sports with their friends or on local teams, and so we also hope to learn something that might help us improve.

It’s much the same in esports; fans are usually gamers themselves, and they want to see their favorite games played at the highest competitive level because it’s exciting and inspiring. And, just like other sports fans, gamers also hope to learn something that might take their own performance to a higher level. There’s an entire industry built up around video games and tons of revenue associated with esports, so there are plenty of financial opportunities for players to become professionals if they practice enough.

Computers, Consoles and Mobile Devices
In the early days of competitive gaming, personal computers were the most common device used by esports gamers. Today, however, athletes perform on consoles and mobile devices in addition to PCs. Computers are the easiest platform to interface with an AV system, because they have a variety of outputs and offer granular control over system settings. Consoles feature standard outputs like HDMI, making them simpler to set up but yielding less control over the settings. Gaming on mobile devices is relatively new and we have less experience and limited technology for interfacing, but 60% of all new gamers are playing exclusively on mobile devices. AV professionals need to be prepared to deal with any or all of the above types of devices.

Types of Esports
It’s important to consider what type of game is being played at each event, as each genre has its own set of technical requirements. There are four main types of esports games, which pose increasing degrees of complexity when it comes to preparing the AV system:

Sports Simulators
This category includes games that simulate real-life sports like soccer, football, basketball, baseball, hockey and boxing, but we also include fighting games like Street Fighter and Tekken in this category. Matches can range from two individual players to two teams with three to five players each. This type of game is usually the simplest, from an AV perspective, because all of the players see the same screen. Because of this, there’s no reason to keep players from being able to see what’s happening on other players’ screens, and they can be grouped closer together.

First-Person Shooters
The second category consists of first-person shooters like Call of Duty, Counterstrike (CS:GO), and Overwatch. These games are characterized by high-speed action with each player having their own unique point-of-view. The main challenge with first-person shooters is that you can’t see the whole map at one time. Another challenge is that the speed of gameplay combined with the first-person perspective has the potential to cause motion-sickness for audiences watching.

In order to give the audience the best viewing experience, the best method is taking a video feed from “ghost players” that run a spectator mode of the game. They have the freedom to move, fly and zoom around the map but are invisible to the players and can’t interfere in the action. These players function as phantom camerapersons. Keeping out of your competitor’s view is a main tactic, so teams need to be isolated so that they can’t see the other teams’ screens or the main video screen.

Real-Time Strategy
In this genre, players control multiple characters from a top-down view. These games usually simulate the strategies of commanding generals at war with an enemy force. Each individual player has a field of view that is limited by a “fog of war,” meaning the player can only see areas they’ve explored, and can’t necessarily see the enemy’s territories. By contrast, the viewing audience needs to be able to see the whole map or arena. Again, this requires a spectator player to provide a complete video feed of the entire map.

Battle Royale
The final category of esports games is one of the newest genres being played. Battle royale games have exploded in popularity in the past few years, with popular titles like Fortnite and Apex Legends, leading the market. These games host up to 100 players in the same arena, with the simple goal of being the last player standing. From a technical standpoint, these games are similar to first-person shooters, but with a third-person perspective. Another difference is that the majority of players are gaming on mobile devices, so accommodating this type of input is crucial.

Two Audiences
A typical esports event will have two audiences: a live in-person audience and a streaming audience, tuned into the broadcast from home. Each audience has its own set of priorities, and the needs of both must be considered when designing an event. For example, the live audience wants an immersive audio experience, with the same intensity as a rock concert. Meanwhile, the broadcast audience needs clarity to clearly understand the commentary. On the visual side of things, the broadcast team needs bright, clear lighting for their cameras to operate properly, but the live audience wants an engaging light show with rich colors and dazzling effects.

Audio Systems for Esports
From an audio perspective, we need to be able to mix a variety of sources (player intercoms, in-game audio, judges, coaches, and shoutcasters) and deliver separate audio feeds for the live audience, broadcast audience, and possibly to the athletes themselves. In order to accomplish this, we need to utilize an audio matrix. An audio matrix enables any input to be routed to any output or multiple outputs, and many matrices support mixing as well, simplifying the workload of the live and broadcast audio engineers.

Traditional audio matrices are typically single-unit devices that can be connected by a proprietary format and include transport between various areas of the event space. The downside of the traditional matrix is that it’s usually limited to a certain number of inputs and outputs, and if you exceed that, you’ll need to buy an additional device. Fortunately, the ubiquity of Audio-Over-IP (AoIP) standards such as Dante or AES67 now makes it possible to distribute any number of audio inputs and outputs over a network. Network matrices are only limited by the bandwidth of the network itself.

Utilizing a network audio matrix, we can receive the audio signals from a high number of sources, including player devices and team intercoms, as well as microphones for the players, judges, coaches, and shoutcasters. We can then transmit them to the front of house mixer, broadcast mixer and player intercom systems, as well as route them through signal processors and networked amplifiers.

The goal of lighting an esports event is to simultaneously deliver high-quality visual experiences to the live and broadcast audiences. Photo used with permission by Techsound (Shanghai).

Lighting Systems for Esports
Lighting also needs to be approached carefully at esports events, because the goal is to simultaneously deliver high-quality visual experiences to the live and broadcast audiences. Lighting fixtures from Martin.com and other brands, used in esports, generally fall into four categories:

Video Systems for Esports
Just as we discussed with the audio and lighting systems, we need to design the video system to accommodate the differing requirements for the live and broadcast audiences. The live audience may only need to see the gameplay on screen, with occasional camera close-ups, while the broadcast audience will likely need a combination of gameplay and camera footage of the players, shoutcasters, and audience.

In order to show the gameplay to the audiences, we utilize dedicated spectator devices to provide the video feeds. This ensures more control over what the audience can see, with the added benefit of keeping lag, associated with video-interfacing out of the player equations.

Rightsizing Your Esports Event
Not all esports events are created equal, and an AV system utilized at one event may not be appropriate for another event on a different scale. If you’re tasked with handling the AV for an esports event, this section will show you the essential equipment you’ll need to produce quality experiences for your audiences.

For small or mid-sized high school or university-level competitions with a limited in-person audience, you’ll need:

JBL VTX A12 and A8 line arrays offer a complete tour sound solution for mid- to large-size touring applications and high-end fixed installations.

For large events with audiences of more than 300 people, consider adding the following:

Audio – You may want to consider upgrading the portable powered speakers to JBL VTX line arrays or other larger PA systems, similar to those found at concerts.

I hope you enjoyed this article, but I also invite you to view my full JBL Learning Session Webinar video replay: ‘Rightsizing Esports: Technical Solutions from School to Stadia′. 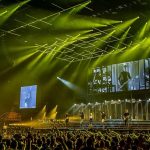 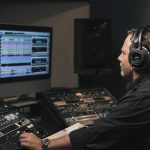 Cameron O’Neill is a 20-year veteran of the event industry, having worked at the Sydney Opera House and for Riedel throughout Asia. Recently, he has helped many eSports companies in China build their A/V systems, including major events, installed facilities, and a major company’s network studio system. Cameron is a Sales Director in the Professional Solutions division of HARMAN.