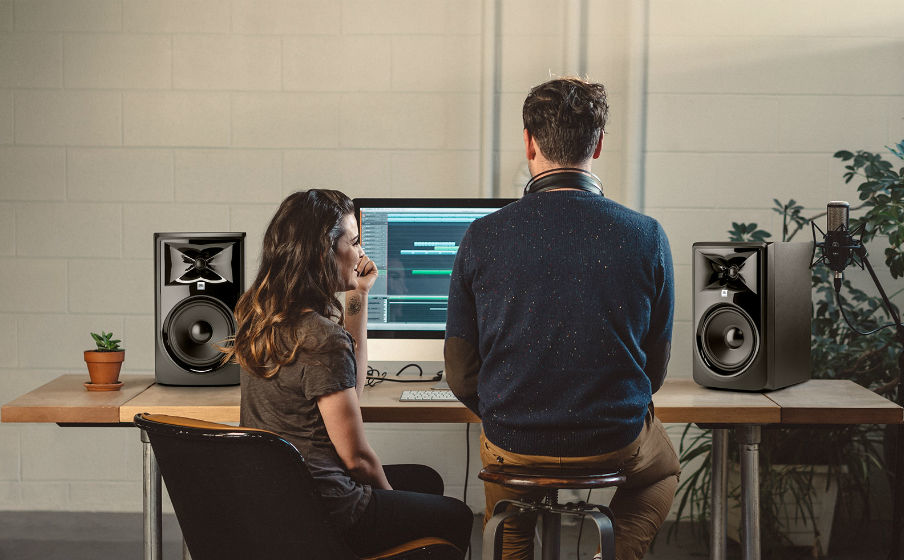 You’ve spent long hours in the studio carefully fine-tuning your mix, obsessing over every detail until you’re satisfied with your sonic masterpiece. But when you listen to your finished product on a new system—your car, your home stereo, headphones—you’re shocked to discover that it sounds absolutely nothing like that mix you worked so hard to perfect. What the heck happened?

You can probably blame your studio monitors.

No matter what kind of music you make, where you record or what kind of gear you use, your studio monitors are the centerpiece of your studio, the lens through which you evaluate your work.

Choosing the right studio monitors can seem daunting, but we have some great tips for making the process easier, plus advice from a few big guns who have mixed thousands of records by top artists and racked up dozens of Grammy Awards between them.

It doesn’t matter how much you spend on microphones, preamps and outboard gear if you can’t work with an honest, accurate translation of your mix.

The Windows to Your World
Your monitors are the most important tools in your rig. It doesn’t matter how much you spend on microphones, preamps and outboard gear if you can’t work with an honest, accurate translation of your mix.

It’s important to distinguish between studio monitors, which are used for making critical mix decisions, and hi-fi monitors, which are meant for pure musical enjoyment. While hi-fi monitors “flatter” sound and tend to exaggerate highs and lows (imagine a “smile” curve on a graphic EQ), studio monitors are designed to be as neutral as possible so you’re able to make accurate decisions about what you’re hearing.

Think of it as looking through stained-glass window versus a clear windowpane: Stained glass lets in light in beautiful colors and patterns, but sometimes you just need to see what’s on the other side—even if it isn’t pretty.

“When I’m looking for a studio monitor to work on, I’m looking for the truth,” says Chuck Ainlay, a Grammy, CMA and ACM Award-winning producer/engineer who’s mixed albums by Mark Knopfler, Taylor Swift, George Strait and Vince Gill. “I don’t need it to be hyped. When I play music through speakers, I want it to be a challenge. I want to have to work with it to make it sound really good.”

It’s easy to be fooled by the sound of your speakers. Imagine, for example, that you’re monitoring on a very bright system: You might hear too much treble in your mix, so you back off the highs. But when you play that same mix on a more balanced system, it sounds muddy.

“Certain speakers that I’ve come across—and I’ve seen a lot of people using them—when I have those speakers up and I bring a microphone up, it just automatically sounds good,” says Ainlay. “There’s nothing worse than working in the studio all day long and thinking that you’ve recorded something fantastic, and you go home or you turn that music on in your car and you feel let down. That’s the worst feeling in the world.”

“What I’m listening to when I listen to new monitors is not so much that I hear them, but that I don’t hear them,” says George Massenburg, a Grammy-winning producer, engineer and inventor with credits that include Linda Ronstadt, Billy Joel and James Taylor, along with numerous patents for his groundbreaking audio equipment designs. “Technology that’s transparent to an artist’s vision is what we’re looking for.”

A Personal Decision
It’s difficult to quantify what makes a “good” monitor, especially when you are considering its most defining characteristic: sound.

“Picking home or studio monitors or even earbuds is such a personal experience,” says Grammy-winning producer/engineer Frank Filipetti, whose credits include James Taylor, Luciano Pavarotti, Carly Simon, George Michael, Korn and extensive work in theatre, film and studio design. “It’s very difficult to give anyone advice without knowing how they listen. I can only say that I’m not listening for the sound, per se, but for the emotion and feeling that I experience. I pay attention to my body language.”

Al Schmitt, who has recorded the likes of Frank Sinatra, Johnny Cash, Barbra Streisand and Diana Krall and has earned 23 Grammys, 160 Gold and Platinum albums and a star on the Hollywood Walk of Fame, says he seeks out a monitor that’s comfortable to listen on. “And, I make sure I’m hearing an equal amount of everything and nothing is peaked out; I’m not getting too much of a low end or too much of a top end. I look for something that’s fairly flat.”

It’s important to match your monitors to your studio size. As a general rule, the bigger your space, the bigger the monitor.

JBL 104-BT Reference Monitors with Bluetooth deliver the sound we’re legendary for in our most compact footprint.

For desktop production or multi-use spaces, JBL 104-BT Reference Monitors with Bluetooth deliver the sound we’re legendary for in our most compact footprint. These powered monitors are based on a coaxial driver design combining a 4.5-inch LF driver and .75-inch soft-dome HF driver, housed in stylish oval cabinets that complement any living space. 104-BTs offer Bluetooth functionality for the flexibility to check mixes over more platforms and the ability to stream both wired and wireless sound anywhere.

Adding a subwoofer can extend the low-end range of your system, which can be very revealing if you have smaller monitors or are mixing genres such as hip hop with extended low-frequency range. The JBL LSR310S 10-inch powered subwoofer features JBL’s patented SlipStream port design, which works in concert with the LRS310S’s low-frequency driver to deliver deep, dynamic bass at any playback level. Its XLF setting activates tuning that emulates bass-rich club scenarios.

Think about the space outside your walls: Is your studio in a freestanding space, like a garage? Or does your studio share walls with other people? Low end in particular travels right through bedroom walls—a consideration if you’re trying to keep the neighbors happy.

Choose a monitor size that complements the genre of music you make. Into acoustic folk? You’re probably going to be fine with 5-inch speakers. Producing music that will end up on club P.A. systems? You’ll need a reference system that delivers deep low end.

You’ll find quality monitors in every size and price range, and incremental increases can sometimes translate to dramatic improvements.

Narrowing Your Choices
When choosing monitors, it’s important to set a budget—but be flexible if you can. You’ll find quality monitors in every size and price range, and incremental increases can sometimes translate to dramatic improvements.

Consider monitor functionality. By design, speakers don’t offer a laundry list of features, though you will be presented with options such as I/O choices and equalizers that help speakers compensate for acoustic issues in your space.

Review specs such as frequency response, power rating and total harmonic distortion, but take them with a grain of salt. These are all good indicators of a speaker’s ability to consistently and accurately reproduce clean, balanced audio across its range, at different volumes and over time, but specs should always be considered in the context of real-world listening.

When you audition monitors, reference familiar recordings that offer wide dynamic range and a variety of sonic material. Make sure that you’re listening to every model at the same volume level, and audition a few models outside your price range if you can. (We recognize that this can be a challenging process while social distancing.) “Go around and listen to all kinds of things,” advises Schmitt. “Go blindfolded if you can.”

As you audition monitors, pay attention to clarity in low-end material, detail in transients and accuracy in stereo imaging. Note balance across the frequency spectrum, and listen for consistency at different volume levels, especially during sharp dynamic peaks.

Integrating Speakers Into Your Space
Once you’ve chosen the perfect pair of monitors, make the effort to set them up correctly. Studios, especially home studios, can be acoustically imperfect spaces; it’s important to take steps to minimize your space’s impact on your monitors’ response and dial in a solid, accurate sweet spot. (Click here to learn more tips for setting up your studio monitors.)

Some monitors are engineered to sound great without measuring or making room adjustments; JBL 104-BT Bluetooth monitors, for example, are acoustically optimized for desktop placement.

JBL 3 Series MkII monitors feature a Boundary EQ Mode that takes the guesswork out of compensating for acoustic anomalies introduced by the environment.

Other monitors feature built-in signal processing designed to minimize the influence of your space and can even self-adjust to compensate for room problems. JBL 3 Series MkII monitors feature a Boundary EQ Mode that takes the guesswork out of compensating for acoustic anomalies introduced by the environment. Adjust the High-Frequency Trim to tailor high-frequency response to compensate for overly reflective or absorptive listening environments; flip the Boundary EQ switch to compensate for low-frequency issues that can occur when loudspeakers are in close proximity to walls.

You can also apply EQ manually to smooth out your room response if you’re well versed in acoustics.

Keeping Things in Perspective
Ultimately, your monitors, like everything in your studio, are tools that serve your musical vision. “If I hear a record I’m familiar with, coming at me with a powerful and majestic sound, I also want to know that it’s conveying the emotion that the artist is trying to express,” says Filipetti. “And not just the artist, but the arranger, the producer, anybody involved with the making of that recording. That’s what led me to my JBL M2s. It wasn’t just majesty, it was euphoria.”

“What I look for when I walk into a studio is forgetting everything about the technology,” adds Massenburg. “And simply responding to the moment with sensitivity and artistry.”

And isn’t art really what it’s all about? 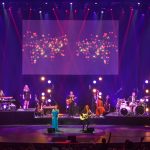 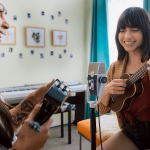