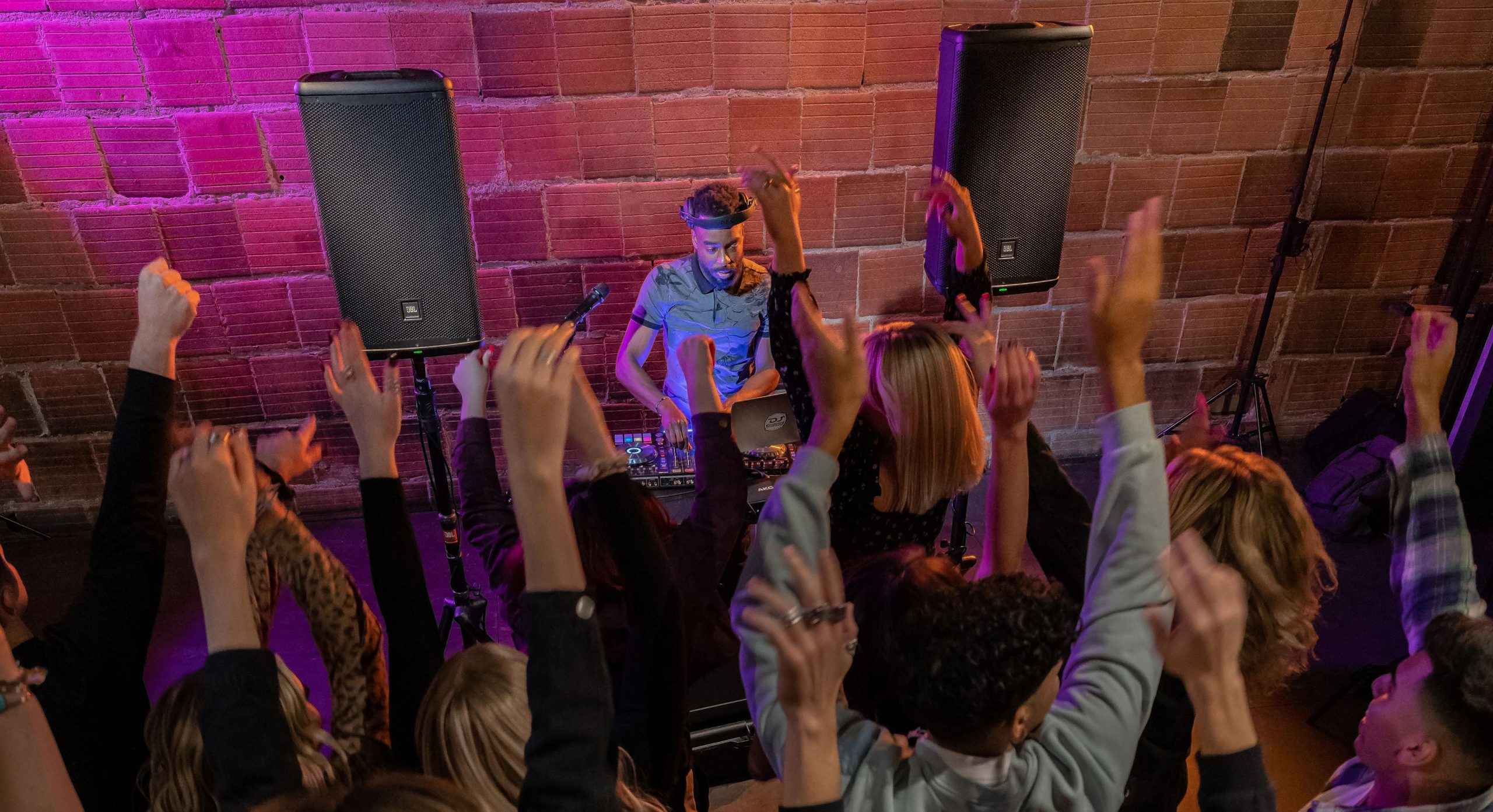 Musicians, DJs and audio engineers: if you’re seeking more volume and versatility in a portable PA, we think you’re going to really like the new JBL Professional EON700 Series. The latest evolution of the EON powered PA product lineup delivers clean output at any volume level, thanks to next-gen driver and horn designs as well as a powerful feature set that helps performers sound great, fast. 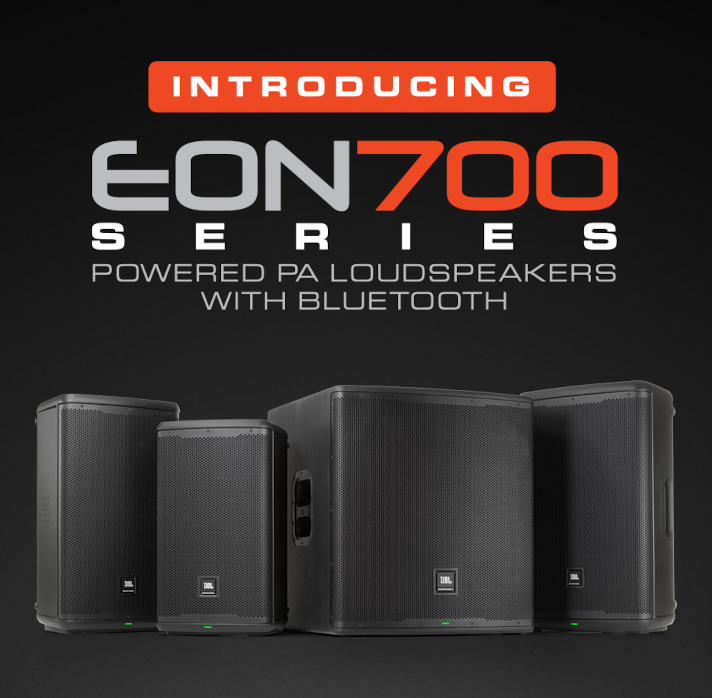 We’ve been receiving some really positive feedback since rolling out the series; these are some of the benefits that we hear users are enjoying most: the ability to dial in a signature sound with the built-in 3-channel mixer and advanced DSP, the ease of stopping feedback at the push of a button with integrated dbx Automatic Feedback Suppression, having quick access to functions via the on-speaker color LCD screen and JBL Pro Connect app, as well as Bluetooth 5.0 streaming and versatile mounting options.

There’s a lot going on under the hood, so Brandon Knudsen, JBL’s Portable PA Product Manager, sat down with HARMAN Insights contributor Sarah Jones to break down the technologies driving this versatile new series.

The EON700 Series is an evolution of the legendary EON Series. People might be surprised to learn that EON powered PAs have been around since 1995.
The very first powered PA speaker was a JBL EON. It was originally designed as more of an experiment than anything. And then we figured out, “Hey, this actually works, this actually sounds pretty good,” and then we improved on the concept that grew into a continually-evolving product over time. For the new Series we designed four models to meet the needs of most users and applications. These include the 10-inch EON710, 12-inch EON712 and 15-inch EON715 powered PA speakers as well as an 18-inch EON718S powered PA subwoofer. 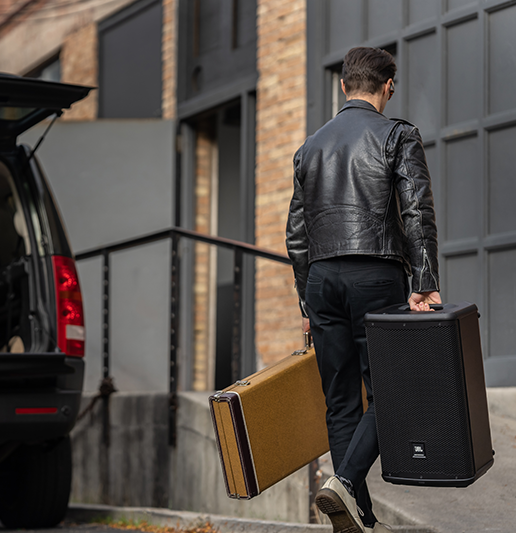 The EON700 Series was designed to be easy for just about anyone to transport and load in.

Why do you think the series has been so successful for so long, even as other manufacturers developed powered PAs?
Powered speakers in general are just so much more convenient. Back in the day, you used to have to bring heavy speakers, and then on top of that, heavy power amps. Having a self-contained powered speaker as opposed to multiple heavy components is what made powered speakers really take over the category. Everybody has their own design philosophies, and more competition in the space has really driven innovation. Powered PA speakers started out big, bulky and heavy, and they’ve gotten smaller and lighter and faster, which is really fun to see.

Why was it time to introduce the EON700 Series?
We initiated the development of the previous generation, the EON600 Series in 2012 and of course the technology has improved dramatically since then. And I’m not just talking about Bluetooth or DSP, but even down to voice coil designs and power efficiency and things like that.

It was time, based on our research for some of the other higher-end acoustic products that we make, to start incorporating those innovations downstream.

Let’s talk about the new acoustics package.
At JBL Pro, the first feature we always start with is the acoustic package. The EON600 compression driver is very strong and powerful, but we felt that it could be even better. So that was our first improvement. We wanted to make sure we had a nice, neutral frequency response that didn’t break up as you start to drive the speaker. Power compression was at the forethought, and the complementary horn really just means that as we increase volume, we don’t lose any vocal clarity. You don’t lose any clarity, especially in your low-mids; past the crossover point, the compression driver does a very good job of holding up and complimenting the new woofer design.

We designed our woofer to take better advantage of a larger power amp design. And that got us the ability to actually drive the woofer to a point where we minimized our overall system power compression. When you’re at 70% or 50%, the speaker’s going to sound the same as it is when you’re running it full throttle. That makes for a very predictable and consistent-sounding speaker anywhere you use it.

What about Bluetooth implementation?
When we designed EON600 in 2012, people didn’t use Bluetooth audio as they do now. Nowadays, most people have multiple Bluetooth devices active at all times because the technology is so much more consistent and reliable now versus what it was 10 years ago. So that really drove our decision to include Bluetooth audio in this Series.

This series is very versatile and scalable. How did that affect the design process?
Well, I’m a big proponent of versatility. I don’t like products that can really only serve a confined purpose because that generally doesn’t offer a value-added user experience. At the end of the day, I want whoever is using our products to take them far beyond their expectation.

There are so many applications for speakers that users may not even be aware of. How many times have we taken a very small speaker to a pool, when we could have taken a bigger speaker if we had known that it was capable of doing the task?

Watch an In-Depth Walkthrough of the EON700 Series 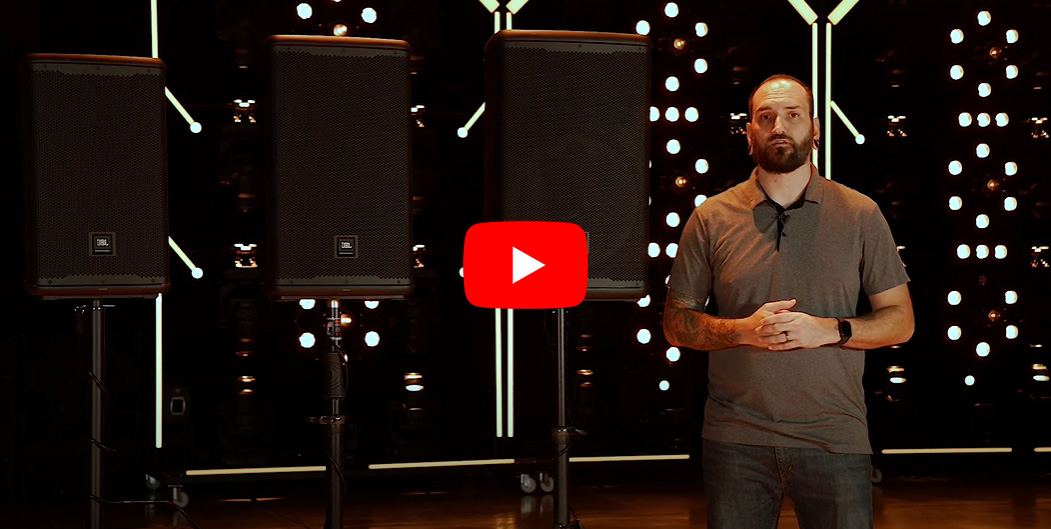 As a musician yourself, how would you say the EON700 systems cater to the way people are performing today?
Ease of use is the primary driving factor. We wanted to make sure that it’s easy to get this product up and running. If you’re plugging in a DJ mixer or a standard outboard mixer, you’ll find there are two knobs. There’s a main knob and a channel knob, and you turn them both up and boom-you’re getting audio-that’s it. We also built the DSP to be extremely easy to use to ensure an overall simple, streamlined user experience. 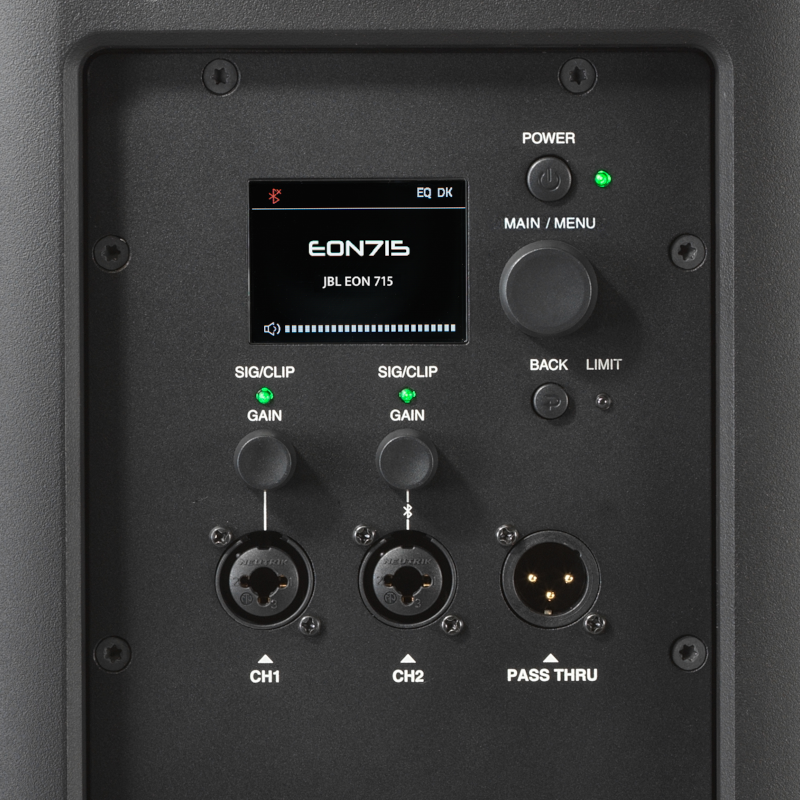 With the EON700 Series, having direct DSP access from an LCD on the back of the speaker has been extremely an extremely convenient feature for users.

We know that complex, difficult setups can quickly eat into profit margins for performers, but it can also eat into their time and enjoyment of their craft. Almost everyone that is a performer is doing it because they get gratification from it, and adding a barrier is not helping anyone.

As more features get packed into portable PAs—especially digital technologies—the more important ease of use becomes.
The EON600 has a significant amount of DSP built in but it is only accessible via an app. With the EON700 Series, having direct DSP access from an LCD on the back of the speaker is a huge feature because people don’t always want to use an app; sometimes you just want to make adjustments on the fly or just turn on your Automatic Feedback Suppression and go.

Maybe you’re using a single speaker for speeches at a wedding—and we all know that people at weddings are not necessarily the greatest microphone handlers, right? If I’m a wedding DJ or an event performer, then I can just bring one 10-inch EON700, plug a simple wireless microphone system into it, set a speech preset and I’m done. So it’s things like that, thinking of different ways that people can utilize these speakers in the most useful ways and how we can make that process easy to manage. 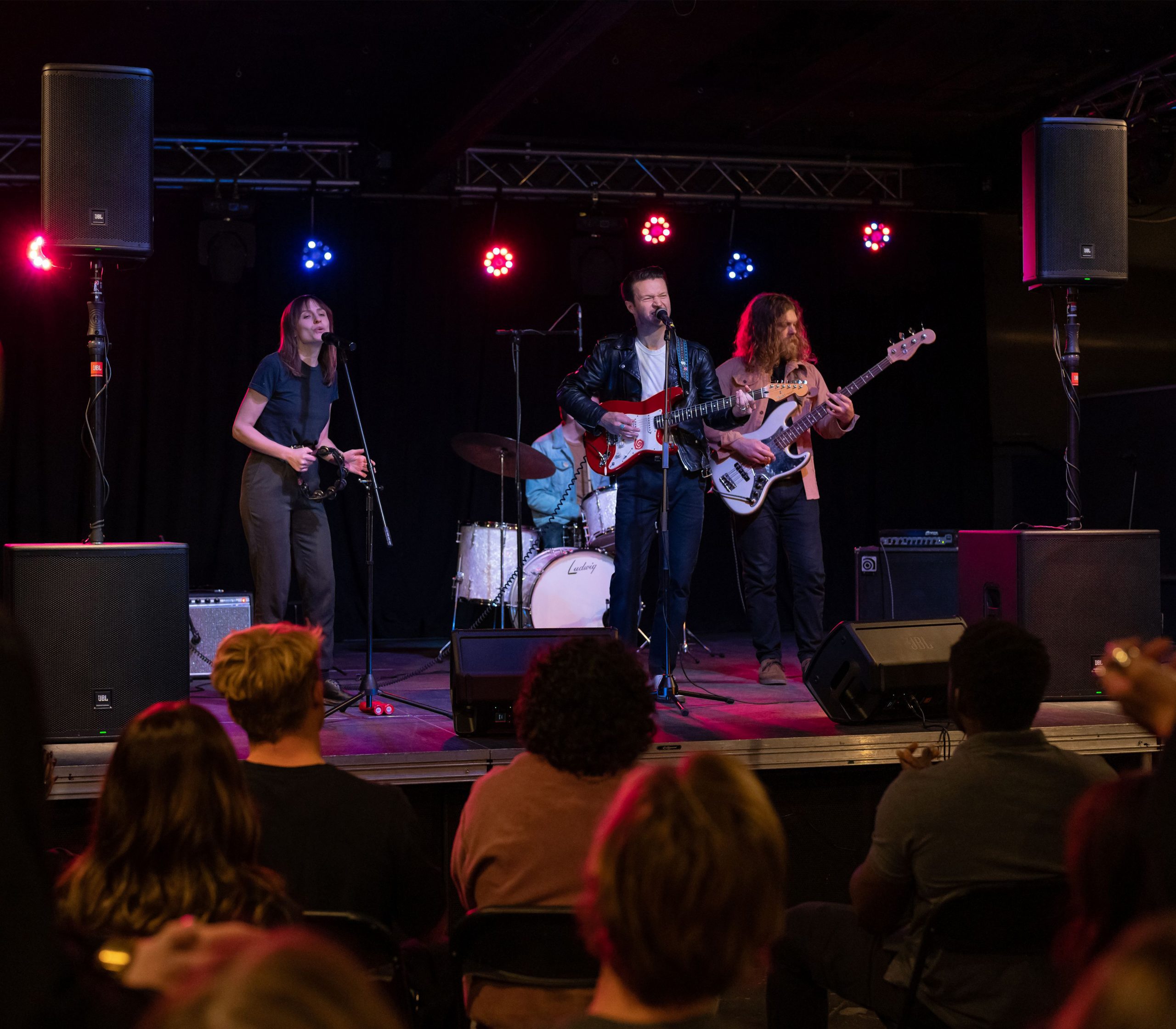 “If you want to set up a system for a band where you have two 15s for your mains, two 18s because we all love bass, and then three 10s for your monitors, you’re still within your 10-speaker limit to add even more as your needs require.”

The system is really scalable. You’re talking about simple speech reinforcement but you can also use these as floor monitors. And then you can also do things like configure the subs in cardioid configuration. How far can you go to scale up the system?
Quite far, especially if you’re using a full-range system. And when I say full-range, I mean two speakers and a sub, or two speakers and multiple subs. But when you’re using a full system, especially if you’re time-aligning it properly, you could set up side fills. This could cover a whole park for four or five hundred people if you’re running it correctly. And then you have the ability to simultaneously set up and run that system in one app, as opposed to having to run to each speaker. It all gets along and it all speaks the same language.

If you want to set up a system for a band where you have two 15s for your mains, two 18s because we all love bass, and then three 10s for your monitors, you’re still within your 10-speaker limit to add even more as your needs require. Maybe you want side fills, maybe you want downstream fills – these speakers give you the ability to do that. There’s no other speaker in this price category that gives you the ability to fully time-align speakers and use them in the same app. 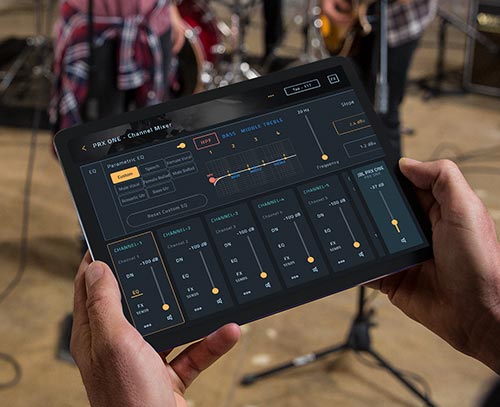 Available for Android and iOS phones and tablets, the JBL Pro Connect app opens up a world of possibilities for hands-on control over a full suite of EON700 mixer, DSP, and Bluetooth features.

Sounds like this also has a lot of applications for rental houses?
Oh, yeah. Rental houses can dial in a system at their facility, and then give that iPad to a customer who may not know what they’re doing, along with their system. All the customer has to do is turn on the speakers and load the iPad, and now they have full app control-already set up.

We built features that make these speakers well suited for rental houses: the speakers are designed to be stacked on top of each other for easy storage. They have the ability to be installed or mounted using a universal yoke mount. Those features increase the relevance to rental houses where they’re able to do temporary installs and things like that. 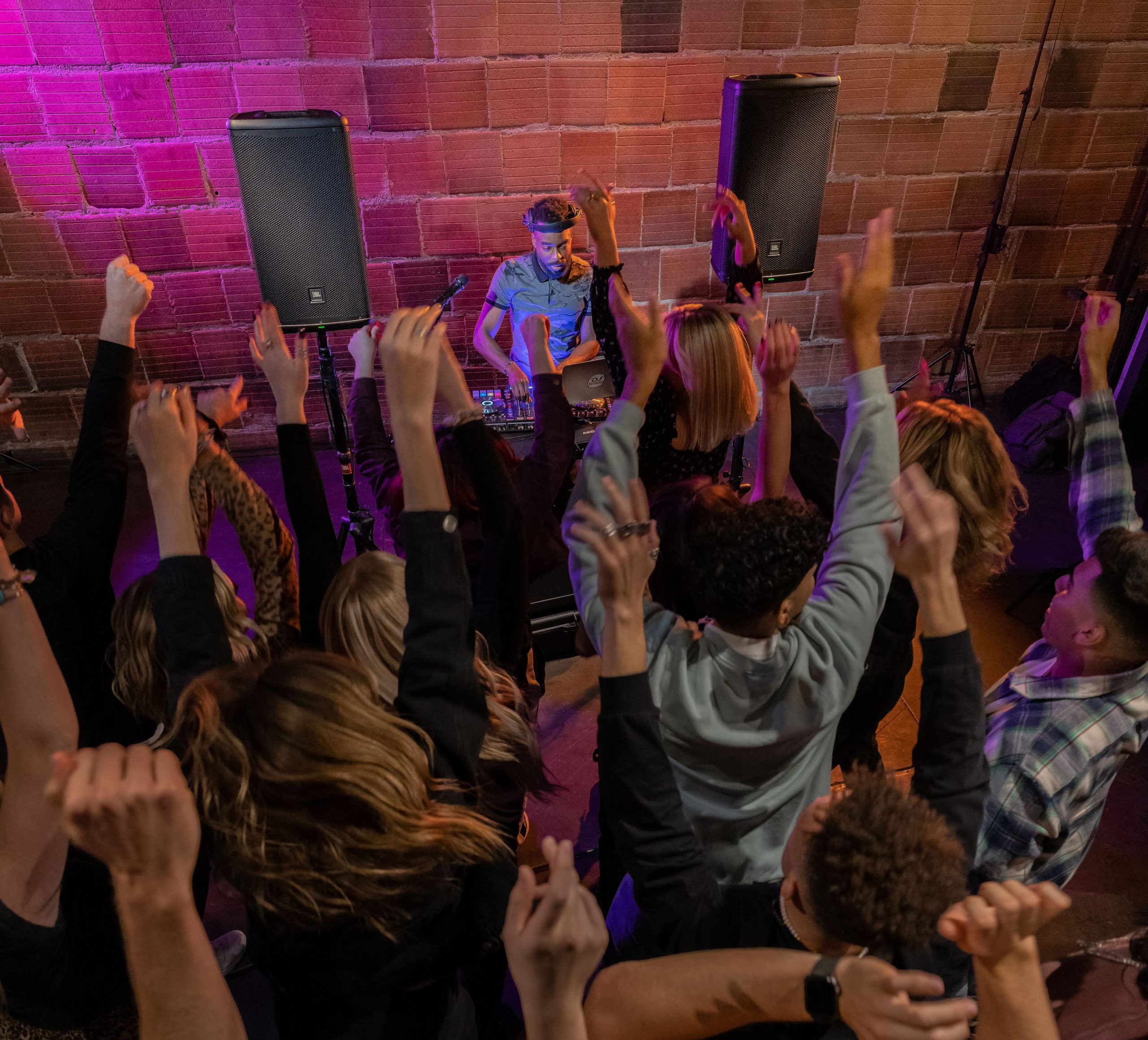 JBL’s stress tests are legendary. How do you make sure these speakers are ready for the real world?
A lot rightfully gets made of our stress-testing protocols, because they’re beyond industry standard; nobody tests at the level that we do. When it comes to stress testing, a lot of people think, “Oh, it’s just the woofer, or it’s just the tweeter.” With us, that’s not the case. We stress-test individual components to their max specification to make sure that they’re going to hold up. But it’s more than just stress testing: We run thermal tests, we run EMC tests, we run drop tests, we run shake tests, we run salt spray tests. The reason that we can stand behind our products, so much that we can say, “we include a seven-year warranty,” is because we know our products are going to go the distance and then some. 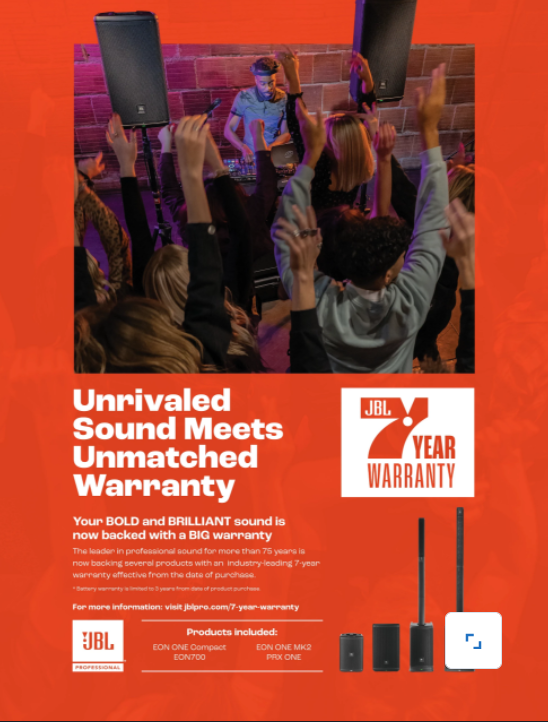 EON700 Series is Backed by an Industry-Leading 7-Year Warranty
In addition to the powerful fidelity and features inside the EON700 Series, it’s also covered by an unprecedented 7-year warranty effective from the original receipt date of purchase. This warranty is a product of JBL’s continuous dedication to quality components and testing that includes a standard 100-hour acoustic stress test, a battery of aging and drop tests and a wide range of stringent, global electronic testing and certification procedures. Note: The warranty applies to all product components except batteries, which continue to include a robust, three-year warranty. Learn more.

HOW CAN WE HELP?
If you are interested in speaking to a JBL solutions expert to learn more about the EON700 or any other assistance, please contact your JBL or HARMAN Representative or fill out this quick form and someone will contact you. 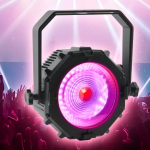 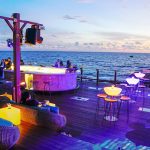