For over 125 years, Nashville, Tennessee’s Ryman Auditorium has built a reputation as being one of the world’s most beloved music entertainment venues. “The Ryman” story starts in 1885 when it became a Union Gospel Tabernacle and was soon referred to as the Carnegie Hall of the South. From the 1940s to the 1970s it served as the long-time home of the Grand Ole Opry and has showcased a who’s who of music performers ever since. Today it continues as one of the most sought after, continually booked and sold out music halls for a wide range of music artists.

One of the key factors behind the Ryman’s storied success, is the level of attention and care it receives by its caretakers and technical staff. Throughout its lifetime, the Ryman has been remodeled, re-configured and re-tooled, numerous times, with the goal each time of reinforcing the venue’s legendary acoustics. Since 1994 and through two other sound upgrades, JBL loudspeakers have been chosen again and again to ensure that artists sound their very best from every seat in the house.

Most recently, Ryman staff were challenged to take advantage of the latest loudspeaker innovations to yet again, improve the sound throughout the venue, especially under the balcony. The HARMAN team visited the Ryman to experience the JBL upgrade for ourselves and to talk to staff to get their thoughts on its latest inclusion of JBL VTX A12 Line Arrays, JBL VT4886 Line Arrays and JBL V4883 Subwoofers.

Why do you think the Ryman has become such a popular venue?
“The Ryman is an amazing building, 125 years ago it opened as the Union Gospel Tabernacle and in the last 125 years this building has been a Church, it’s been a performance venue for theater and opera,” said Sally Williams, Ryman Senior VIP of Operations. “But it was also the home of the Grand Ole Opry from 1943 to 1974. Because of that, the history attracts artists.”

What are some of the challenges in ensuring that the Ryman has the right audio technology in place to support the artists? “It is technically difficult to meet the challenges of today’s artists in an environment where you have a museum around you,” said Jeff Hatfield, Ryman Technical Director. “The experience has greatly improved in the sense that we’ve got a new level of coverage, particularly in the under-balcony area, that we’ve never experienced before. JBL has been a key component to the audio system here, since it was resurrected back in ’94.”

How have needs changed over the years in the equipment to ensure technology evolves to support the evolving sound of the artists? “The older system was really built for Blue Grass in light theatrical stuff,” said Mark Thomas, Ryman Audio Services Director. “The more that the resume got longer and longer with the different acts that were playing here, we were kind of running out of room far as headroom on the system, we couldn’t keep up with some of the louder stage volumes. We realized if we were going to keep trying to do those kinds of shows, it was time to update our system.”

Why were JBL speakers selected for this upgrade? “You want really even coverage when you introduce a new sound system, and we chose HARMAN JBL because they delivered the goods with their new A12,” said Les Banks, Ryman Production Manager and Audio Supervisor.

With this upgrade, what kind of coverage were you able to deliver? “Every seat has a good ability to hear the sound system, hear the performance,” said Dan Heins of Clair Solutions. “Even the ushers are coming up to Les and telling him how much of an improvement it is.” Mark Thomas, Ryman Audio Services Director added, ”They (JBL A12s) have the clarity, they have the impact. I think they (the audience) feels like they’re really part of the show now, where that wasn’t the case in the past.”

Thanks for reading. We’d love to hear your thoughts in Leave a Reply.

For an even deeper dive on this story, check out Mixonline.com’s recent article that further discusses the recent JBL upgrade at the Ryman. 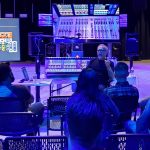 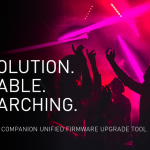 Lane has been an AV super fan for as long as he can remember, since building his first set of speakers to making dual cassette deck remixes to his fierce support for the MiniDisc! Most recently, he's kept busy at HARMAN managing global content marketing.